Following her split from Gerard Pique, Shakira is reportedly being pursued and harassed, and there are’suspicious’ individuals reportedly loitering outside her home.

Following her split with soccer player Gerard Pique, singing phenomenon Shakira is reportedly being hounded and harassed by a number of’suspicious’ males who are loitering outside her home. The Waka Waka hitmaker allegedly got abusive messages from admirers pleading for her to marry them at her Barcelona home, according to Marca. The same has been reported to the police by Shakira’s family, including her brother Tonino Mebarak.

In letters left on her sidewalk earlier this month, one stalker declared their love for her and their intention to “marry her immediately.” The dubious entity wrote, according to Cheat Sheet: “Beautiful woman, I adore you. My sweetheart, I’m coming for you. Right now, I’m prepared to marry you.” The perpetrator is thought to be a Russian man who had been visiting the singer’s home ever since it was revealed that she had broken off her engagement to Pique.

This occurs only days after the Spanish player refused to allow Shakira to travel to Miami with their children, Milan and Sasha, for the summer vacation. After 11 years of marriage, the pair divorced, with rumours claiming that Gerard had an extramarital affair. 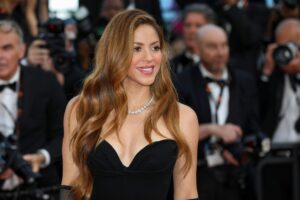 Suzy Cortez, a Brazilian model, made shocking charges against Gerard after the couple split up, claiming that he had texted her indecently behind Shakira’s back. According to Marca, Cortez disclosed that Sandro Rosell, a friend of hers, introduced her to Pique. Added she, “Sandro Rosell, the former mayor of Barcelona, and I were friends. When Pique learned about it, he messaged me and requested my phone number. When I got back to Brazil, he sent me a direct Instagram message, which he deleted every day, asking when I was going to come back to Europe and how large my b*** was “.

The model stated that, aside from Lionel Messi and Philippe Coutinho, other Barcelona players had previously messaged her. “Messi and Coutinho were the only Barcelona players who never send me anything. They appreciate their wives greatly and make wonderful husbands “She spoke of.

Read More: Brad Pitt hints at retirement from Hollywood: I consider myself on my last leg, last semester or trimester