South’s famous actress Samantha is in the headlines these days due to her divorce from her ex-husband Naga Chaitanya. Actor Naga Chaitanya has remained silent in this matter since his divorce from his wife. The actress has spoken openly about her divorce on many occasions. Chaitanya on the other hand is still silent. In such a situation, everyone only wants to know that, what was the reason that separated this famous couple at once.

After several months of this divorce, now news is coming that Naga was not happy with Samantha doing bold roles. According to a news portal, Naga Chaitanya as well as his parents did not want him to play bold characters in films. Or enter any type of item number. 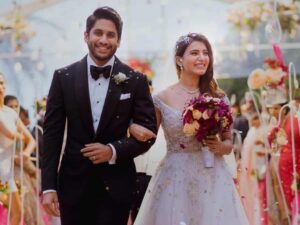 According to some reports, Naga Chaitanya and his family were surprised to see the bold scene of the actress in the web series The Family Man 2. He was very disappointed seeing this scene. Along with this, a video is also going viral, which people are considering as the reason for this divorce. This video of Naga which is going viral is part of one of his interviews.

Naga Chaitanya can be heard saying in this interview that if anything hurts my family, he will not tolerate it. Naga says I am ready to play any kind of character. But if I feel that some thing or act will affect my family, then I will never cross that line. During this, another question was asked to him that, how is the role and the family different? On this, actor Naga says that anything that he does not like. That’s where my line is. Apart from this, I am ready for all kinds of roles.

Samantha and Naga were married in 2017

People are now seeing this interview of Naga on social media by linking it to the divorce of Samantha and Naga. Significantly, Samantha’s item song from Allu Arjun’s film Pushpa The Rise has been launched. Samantha’s bold dance moves are being seen in this song. Let us tell you that the actress has done an item song for the first time in her career. Samantha has worked in more than one film in her film career of 11 years.

Today his fan following is not only in South but all over India. His character in the web series Family Man 2 has made him even more famous. Samantha and Naga got married in the year 2017 with great fanfare. Both married according to South Indian and Christian customs.