SS Rajamouli ‘s directorial ‘RRR’ has been released in many languages ​​all over the world. The film has earned a record breaking record in the country and the world on the very first day. The makers and its cast will definitely be very happy if the film gets the response on the very first day. The film stars Ram Charan, Jr NTR, Ajay Devgan and Alia Bhatt in lead and important roles. The audience is very much liking the chemistry of Ram Charan and Jr NTR in the film.

Film critic and trade analyst Taran Adarsh ​​film Review has given information about the box office collection of ‘RRR’ by tweeting. He told that the film has done a business of Rs 223 crore worldwide on the very first day. The film has earned Rs 156 crore on the first day in India. Not only this. Movie has also overtaken Batman in terms of earnings in Australia. The film has done a business of 4.03 crores in Australia. 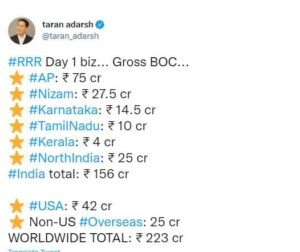 Taran Adarsh ​​has given information about the earnings of film in different states in a tweet. He told that ‘RRR’ (Statewise Box Office Collection) made Rs 75 crores in Andhra Pradesh, Rs 27.5 crores in Nizam, Rs 14.5 crores in Karnataka, Rs 10 crores in Tamil Nadu, Rs 4 crores in Kerala and North India on the very first day. I have done business of 156 crores.

Impact of ‘RRR’ on the business of ‘The Kashmir Files’