Hina Khan, an actress from Yeh Rishta Kya Kehlata Hai, endures cruel trolling for wearing a monokini and sharing images of it on Instagram. As internet users brought up her faith, Hina received hatred online.

One of the most well-known names in the modern TV industry is Hina Khan. She made her acting debut in Yeh Rishta Kya Kehlata Hai, which helped establish her as a household celebrity. Then, Hina Khan entered the world of reality television and garnered admiration for her tenacity, bravery, and audacity. Hina has been representing the nation with pride by attending the Cannes Film Festival and other events. Though Hina Khan has become well-known and successful, she still receives abuse. And it’s because of her attire selection. The former Khatron Ke Khiladi participant tweeted some photos of herself on vacation in a monokini in Dubai. Fans, however, do not like it.

Hina Khan has never been afraid to share photos of herself in a bikini or a monokini on her Instagram. She enjoys holding picture shoots and posting about them online for her followers. Some people like it and introduce her culture into the scene, while others dislike it. In an aqua green monokini, Hina Khan has posted several images. Yes, she was very attractive. After she posted the photographs, her followers were in a tizzy for days. In the Shivan and Narresh monokini, Hina is stunning. “Soak up the sun Hon,” Hina wrote as the caption for the photo.

For wearing a monokini and sharing images online, Hina Khan receives vicious trolling and criticism. Several people questioned her about her religion in comments on her photos. Some people responded by arguing that the Almighty ought to give her some common sense and re-direct her along the correct course. She should be ashamed, some people said in comments. 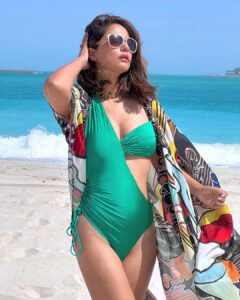 Hina Khan had already responded to the vicious internet abuse that occurs. Hina tweeted a few days ago that limits should be made for the benefit of mental calm. As said by the previous Khatron Ke Khiladi contestant: “People who lack empathy, are impolite, and show disdain come in all shapes and sizes. They bother you in your personal affairs and would say anything to harm you. Therefore, my love, establish boundaries and get rid of anyone who crosses them. You see, boundaries are protective of your mental health.”